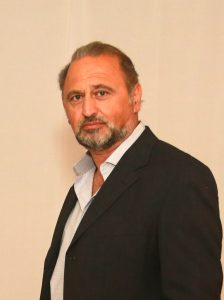 Great art invokes and stimulates your senses, seeping into your hearts and your minds. Every work of art has its own energy. Whether it lies in the smooth curves of a sculpture, or the beat and rhythm of a piece of music, or the tone and color of a painting, that energy defines the ultimate manifestation of the art.

Art is not a luxury, art is a necessity.

The work exists in a space of its own. When you peer at it through your spiritual window, you cross over that threshold and become part of that energy. Once you have made that connection, the work is no longer a two or three dimensional representation. Your personal participation in the art’s effect renders it beyond the measurable constraints of time and space. Right there, the moment is suspended in time, and the energy is as great as your soul will allow.

A celebrated Los Angeles based artist, Yuroz believes that art is the most disarming, ice-breaking and rapport building communication tool to support progress of people, organizations, societies and even countries. In Yuroz’s mind, the essence of art is the energy, which is more powerful than we are. It originates from a higher plane than that in which we live our daily lives. Through the art, we are able to access more potent sources of consciousness and emotion and we become more than we are.

Spanning across mediums and genres, Yuroz’s work celebrates romance, edifies human emotions, promotes peace, and advocates tolerance, encouraging healing and growth while liberating love and compassion. Yuroz, a painter and architect, cuts through dimensional, geographical, and philosophical boundaries to deliver his evergreen and universal messages to anyone his art touches.

Yuroz is the only living American artist who has his work hung in the Vatican’s permanent collection. “The Light of Compassion” honors the sainthood of Arcangelo Tadini, the Saint of the Working Woman, a masterpiece specially commissioned by Pope Benedict XVI’s Vatican office and unveiled at a ceremony where Pope Benedict XVI blessed the painting in Botticino Sera, Italy. 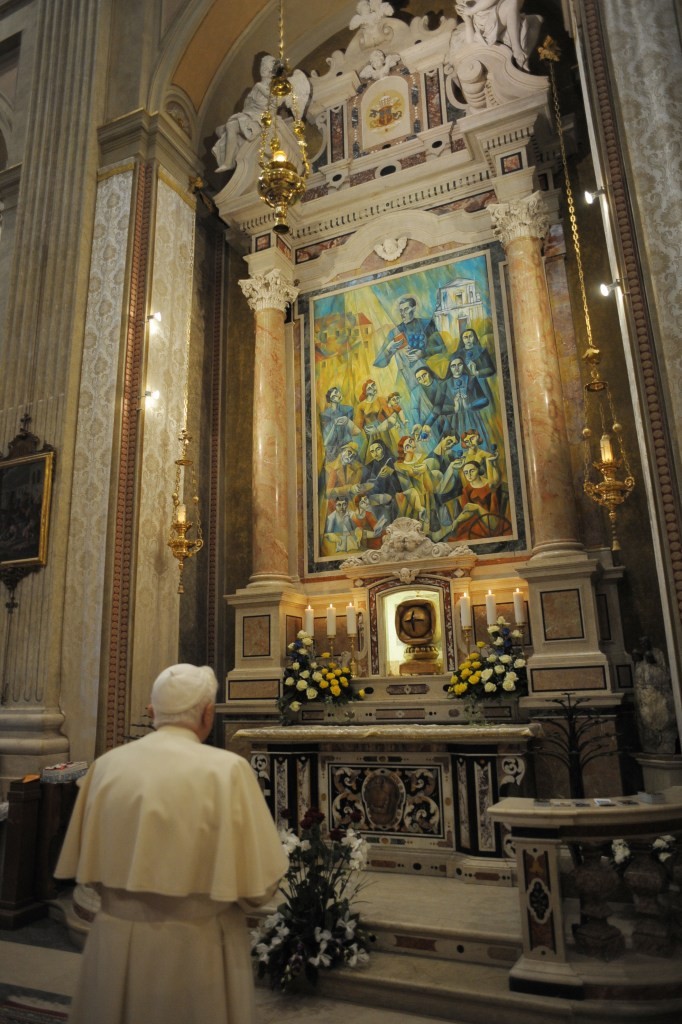 “Light of Compassion” by Yuroz, blessed by Pope Benedict XVI (praying alone in picture) is permanently hung amongst Renaissance masters’ work in the Botticino Serra Church 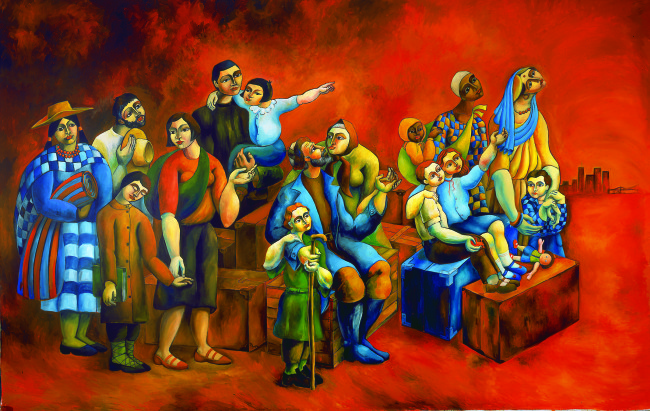 “Respect the Refugees” by Yuroz commissioned by United Nations 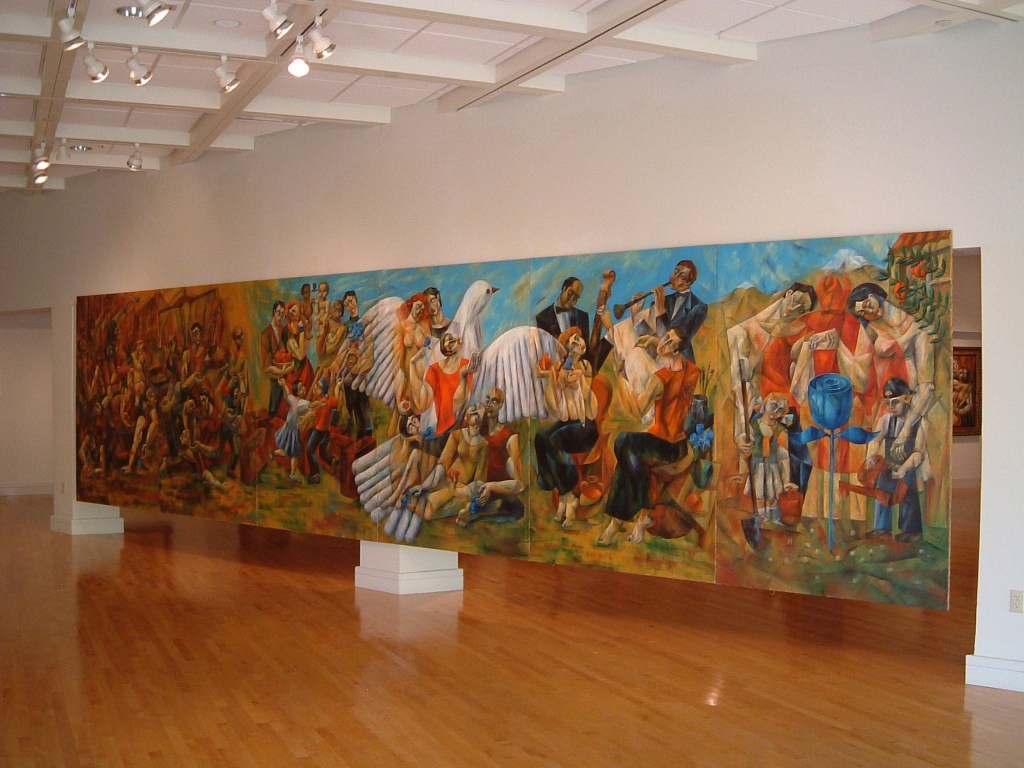 Several million of Yuroz’s stamps were sold around the world, raising funds for the United Nations. These murals have travelled with Yuroz nationally and internationally in ongoing sponsored events to raise awareness and raise funds for the underprivileged and other humanitarian needs.

A devoted philanthropist, through his art and the Yuroz Foundation, Yuroz has raised millions for many more international and national charity events and foundations, donating to causes he embraces. 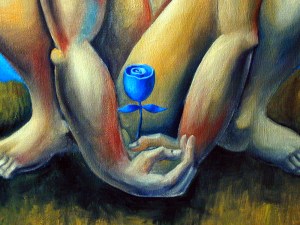 Yuroz’s blue rose as a symbol

Symbolism forms the backbone of Yuroz’s classical romantic paintings and the themes of the stories he tells through his paint brushes. Blue is the color of healing and rose is the symbol of love. Blue rose symbolizes healing through love.Pomegranate symbolizes fertility, creativity, prosperity and power. To the artist, this fruit that bore through the rockiest and the most arid landscapes is a symbol of survival.

Yuroz loves working with children through art, as possibly he is a child at heart, always keeping his senses sharp and spirit fresh. Yuroz’s art cuts through race, politics and religion as he employs universal symbols to express his timeless messages and evergreen themes, with touching stories that inspire and shape new generations of communicators to come. 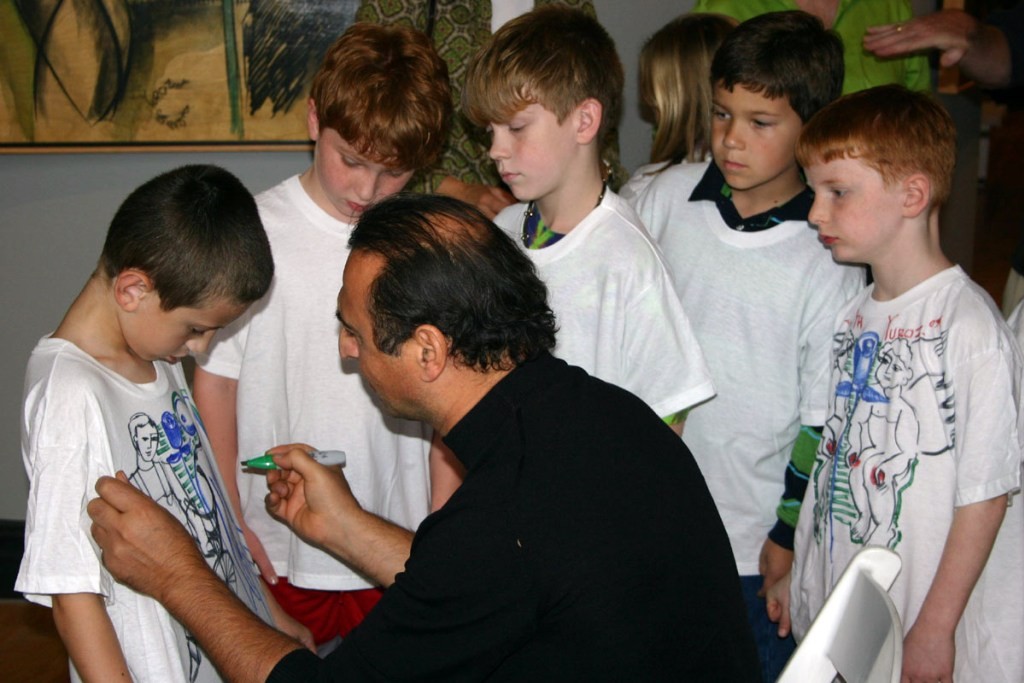 At the age of ten, Yuroz was accepted to attend the prestigious Akop Kodjoyan School of Art in Soviet Armenia. His classical training, combined with skills earned while attaining his Master’s Degree in Architecture from the Yerevan University of Art and Architecture has given him an edge to be able to mesh the attributes of the Renaissance masters with innovations of contemporary art while blending a unique sense of balance, color and space with modern day technology when creating his masterpieces.Yuroz has always been an architect and an explorer all his life. It manifested in many ways over last 30 years in his career being an artist. Careful observation of his work no doubt shows he consistently pushes the envelope and always looks for new and better ways to express his ideas.

Yuroz’s art knows no destination as he continues to innovate. One can’t help but wonder what is on his mind and what is next on his creative path. Whatever discoveries he partakes and wherever his journey takes him, rest assured that Yuroz always finds a magical way to engage you. His unyielding commitment to keep your senses fresh, your feelings warm, and your minds engaged is the very reason why his art is timeless…